An exclusive survey by SellingUp.com has revealed the property related services most – and least – likely to be recommended by word of mouth.

The survey, conducted with online polling firm Toluna, asked 1,000 UK residents which services they had ever used and whether they would recommend the company. Twenty sectors were covered, spanning a range of services to do with buying/selling, refurbishing, maintaining and managing residential property.

Estate agent’s vs electricians, solicitors vs surveyors – who has the best and worst word of mouth reputation in property services?

Survey question: If you haveever hired any of the following home-related services, for which if any, would you recommend the company to a friend? 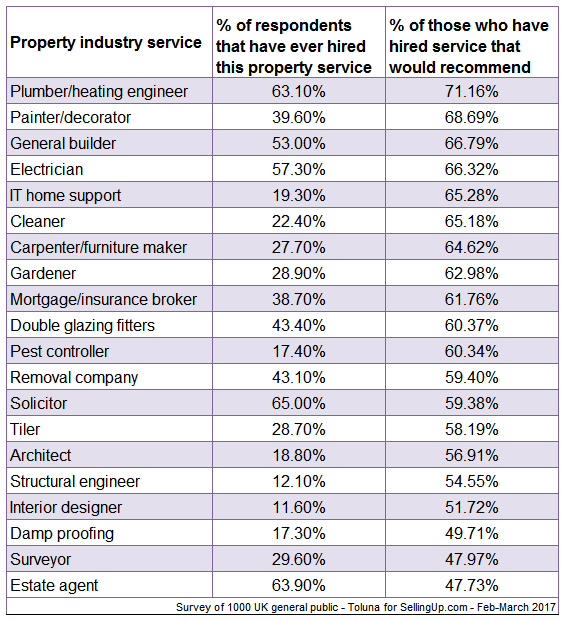 Traditional trades come out on top
Of those who had used a particular service, most likely to be recommended by customers were plumber/heating engineer (71.16%), followed by fellow trades painter/decorator (68.69%), general builder (66.79%) and electrician (66.32%).

People sometimes talk about plumbers being expensive and hard to come by at short notice, but the survey reveals that actually they are delivering excellent customer satisfaction on the whole. Plumbers/heating engineers were the most likely to be recommended of all the property-related services in the poll with 71.16% of those who had used one saying they would recommend the company.

Second highest in the poll were painters/decorators (68.69%). Anyone who has decorated a property themselves will know that it’s never as simple as ‘give it a lick of paint’. The skills of an experienced painter/decorator can make the difference between a highly professional finish and a passable (or not) DIY job. The high position for painter/decorators demonstrates how much this is appreciated by customers.

Good general builders are notoriously hard to find, but those who have found one are likely to want to recommend them to friends and family. General builders were third in the poll, with 66.79% of customers happy to refer.

Electricians, like plumbers, often get called upon in emergency situations when a household has lost power. This gratitude could explain the loyalty customers have towards them and why 66.32% had a willingness to recommend.

As with builders, good cleaners are famously hard to source, but when a customer has one they seem pleased to tell their contacts and spread the word. With a 65.18% referral likelihood, cleaners are near the top of the list of property related service providers.

Gardeners feature in the top half of the table, with a 62.98% referral rate, proving that most customers are happy to share a recommendation of their gardener with friends and family. It seems that a reliable set of green fingers are always appreciated by homeowners with outside space.

The precision finishing required of a tiler and the high standards of proud homeowners may explain why the recommendation rate for this trade is lower than some others, but is still respectable at 58.19%.

IT support is no longer to just be found in the office – increasing numbers are calling for technical assistance at home as our domestic lives get ever more reliant on technology. IT home support services were high on word of mouth list, with 65.28% being likely to recommend the company they had used.

As energy bills soar, double glazing has become an economical and practical choice for millions of households. Despite the old fashioned image of the persistant ‘double glazing salesman’, the reality is that vast majority of people (60.37%) who had it installed would be happy to refer the double glazing fitter to family and friends.

Pest controllers are one type of firm that nobody ever wants to hire, but when they do have the need it’s vital that the service they offer successfully deals with the unwanted intruders. The positive news for people in this position is that 60.34% of customers would refer the pest controller they hired to others, suggesting that most of the time they are delivering a good service.

Moving house is often described as one of the most stressful life experiences, and the choice of removal company could play a big part in helping – or hindering. Fortunately for most home movers (59.40%) their removal company did a job good enough to make them worthy of a positive referral.

Hiring an interior designer is never going to be easy – you need to be careful to ensure the company or individual you commission really understands your client brief to deliver a great looking home. The choice of interior designer worked well for 51.72% of those polled who had hired one, which is still in the positive zone, but shows that it’s not an appointment that should be rushed.

Few services get as mixed a reaction as damp proofing. It is clearly an essential service when a property is affected by damp, but it is difficult to guarantee results, so customers may be left dissatisfied, even if the firm has completed the agreed work. Damp proofing was in the negative zone with 49.71% willing to recommend the company they had hired.

Services like mortgage/insurance broker are sometimes seen as just middlemen inbetween customers and banks, but for many they provide a vital service in both saving time and finding the best deal on the market. Of customers that have used a mortgage/insurance broker, 61.76%would recommend the firm, making it one of the top 10 services in the poll.

When buying and selling a property, a good solicitor ensures a transaction goes ahead with all of the legal checks covered and helps raise and resolve any sticking points in the process. For the majority of customers (59.38%) this is a role that has been handled well by their solicitor, at least enough for them to recommend their services.

As with interior designers, choosing the right architect is never a simple process as it involves a large element of personal taste. The designs and specification needs to be practical as well reflecting the clients’ personal taste and expectations. With a 56.91% customer word of mouth rating, they are still in the positive zone but it’s clear that enough customers were unhappy to emphasise that care should be taken when hiring an architect.

During any major house renovation or construction project the structural engineer provides an essential service that cannot be done without. The safety of the building depends on the structural engineer being thorough and detailed, but also flexible and understanding of the client’s project goals. The survey suggests that just over half of structural engineers (54.55%) are achieving this balance, leaving a significant less happy minority.

After damp proofing, the second lowest satisfaction score in the poll belongs to surveyors. The role of a surveyor includes providing a basic valuation of a property through to conducting a full structural survey report covering every aspect of a property’s condition. Their placing in the negative zone of the poll results (47.97%) suggests that too few surveyors are delivering sufficient customer satisfaction in their work.

Located at the bottom of the list for word of mouth referrals is the much maligned estate agent. Of those who had used an estate agent, less than half (47.73%) said they would recommend the firm. The finding that the majority of estate agent customers would be unwilling to recommend the company they hired suggests that the public reputation of estate agents failing to deliver a valued service has some basis in fact. Whether the reason for the majority of customers seeming to be dissatisfied with estate agents is down to the actual service provided, or perhaps simply a resentment at the level of fees charged, is not clear. Either way, this finding will play into the hands of the new online estate agents who are frequently accusing their traditional high street competitors of over charging and under-delivering on service.

Moving house is often described as one of the most stressful life experiences and the choice of removal company could play a big part in helping – or hindering. Fortunately for most home movers (59.40%) their removal company did a job good enough to make them worthy of a positive referral.